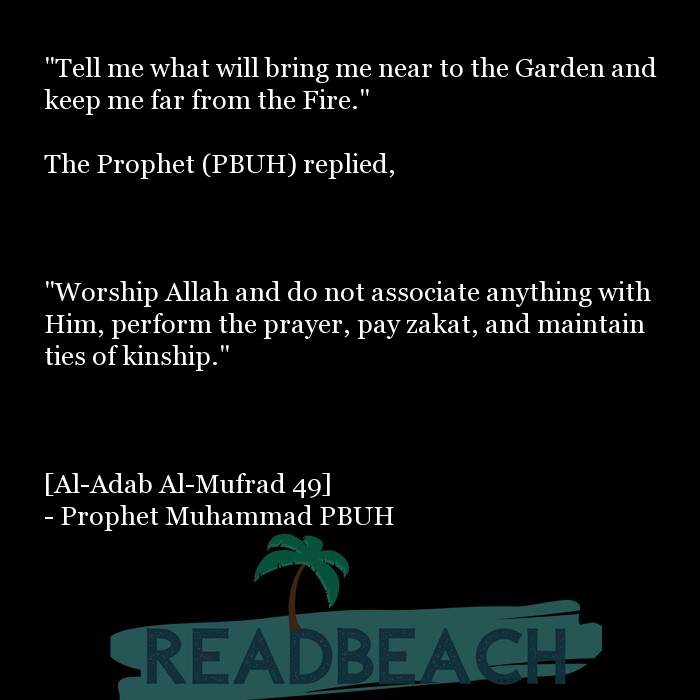 1. "Tell me what will bring me near to the Garden and keep me far from the Fire."

"Worship Allah and do not associate anything with Him, perform the prayer, pay zakat, and maintain ties of kinship."

2. Abu Hurayra said, "A man came to the Prophet, may Allah bless him and grant him peace, and said,

'Messenger of Allah! I have relatives with whom I maintain ties while they cut me off. I am good to them while they are bad to me. They behave foolishly towards me while I am forbearing towards them.'

The Prophet said, 'If things are as you said, it is as if you were putting hot ashes on them and you will not lack a supporter against them from Allah as long as you continue to do that.'" 3. 'A'isha reported that the Prophet, may Allah bless him and grant him peace, said,

4. It is reported that al-Miqdam ibn Ma'dikarib heard the Messenger of Allah, may Allah bless him and grant him peace, say, 6. "Keep a record of your lines of descent so that you can maintain ties of kinship. He will not make his relatives distant when they are close relatives, even if they live far away.

He will not consider them to be close relatives if they are distant ones, even if they live near to him.

Every time of kinship will come on the Day of Rising in front of each individual and testify on his behalf that he has maintained that tie of kinship if he did indeed maintain it.

It will testify against him that he cut if off if he cut it off."

7. "O mankind! Be dutiful to your Lord, Who created you from a single person (Adam), and from him (Adam) He created his wife [Hawwa (Eve)], and from them both He created many men and women and fear Allah through Whom you demand your mutual (rights), and (do not cut the relations of) the wombs (kinship). Surely, Allah is Ever an All­Watcher over you.

Al-Adl (i.e. justice and worshipping none but Allah Alone - Islamic Monotheism) and

Al-Ihsan [i.e. to be patient in performing your duties to Allah, totally for Allah's sake and in accordance with the Sunnah (legal ways) of the Prophet SAW in a perfect manner],

and giving (help) to kith and kin (i.e. all that Allah has ordered you to give them e.g., wealth, visiting, looking after them, or any other kind of help, etc.):

and forbids Al-Fahsha' (i.e all evil deeds, e.g. illegal sexual acts, disobedience of parents, polytheism, to tell lies, to give false witness, to kill a life without right, etc.),

and Al-Munkar (i.e all that is prohibited by Islamic law: polytheism of every kind, disbelief and every kind of evil deeds, etc.),

and Al-Baghy (i.e. all kinds of oppression),

He admonishes you, that you may take heed.

9. "Among the most dutiful of deeds is that a man nurture relations with the people his father was friends with."

10. "I was not jealous of any wife of the Prophet as I was jealous of Khadijah, and it was not because I saw her. It was only because the Messenger of Allah mentioned her so much, and because whenever he would slaughter a sheep, he would look for Khadijah's friends to gift them some of it."

11. Anas said,
"When the Prophet, may Allah bless him and grant him peace, was given something, he used to say,
'Take it to so-and-so. She was a friend of Khadija's. Take it to the house of so-and-so. She loved Khadija."

Authors who spoke about Kinship: