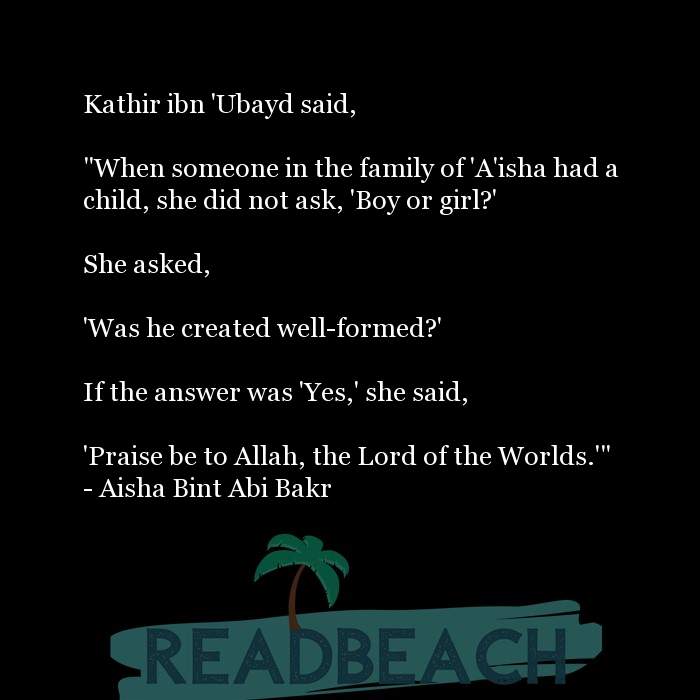 "When someone in the family of 'A'isha had a child, she did not ask, 'Boy or girl?'

'Was he created well-formed?'

If the answer was 'Yes,' she said,

'Praise be to Allah, the Lord of the Worlds.'" while she was on a journey along with the Messenger of Allah (peace be upon him):

"I had a race with him (the Prophet) and I outstripped him on my feet.

When I became fleshy, (again) I had a race with him (the Prophet) and he outstripped me. He said: This is for that outstripping."

5. "I was not jealous of any wife of the Prophet as I was jealous of Khadijah, and it was not because I saw her. It was only because the Messenger of Allah mentioned her so much, and because whenever he would slaughter a sheep, he would look for Khadijah's friends to gift them some of it."

6. I did not feel jealous of any of the wives of the Prophet (pbuh) as much as I did of Khadija though I did not see her, but the Prophet (pbuh) used to mention her very often, and when ever he slaughtered a sheep, he would cut its parts and send them to the women friends of Khadija. When I sometimes said to him, 7. "Messenger of Allah (pbuh) never hit anything with his hand neither a servant nor a woman" When the verses of Surat "Al-Baqara"' about the usury Riba were revealed, the Prophet (pbuh) went to the mosque and recited them in front of the people and then banned the trade of alcohol.